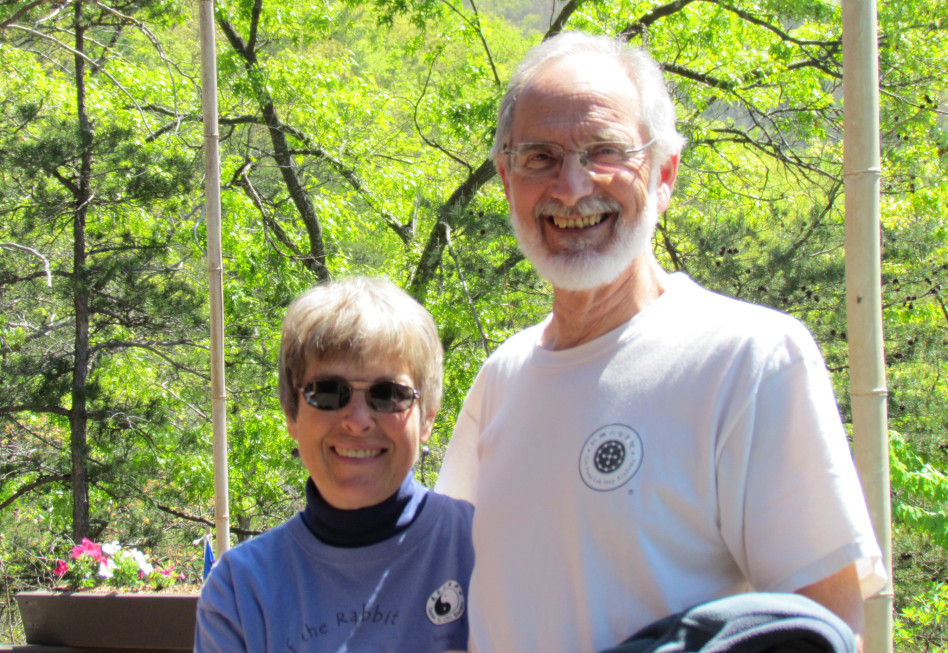 Larry Coleman stood tall”in most crowds he had a vantage point few others shared, and you could spot his straw hat well above the heads of others.

Larry was in a few crowds in his day”at countless demonstrations and actions in Oak Ridge, Tennessee, where he was a fixture in the Oak Ridge Environmental Peace Alliance’s actions for peace and nuclear disarmament. Actually, that is not accurate, if fixture implies a static object. Larry was always in action”starring in a makeshift version of The Butter Battle Book, carrying the tall purple Nipponzan Myohoji banner at the head of the peace walk through town, or even just wandering unawares across the blue line to read the fine print on the sign.

In the process, Larry became a thorn in the side of the National Nuclear Security Administration; recently they began manufacturing reasons to arrest and harass him. Undaunted, though a bit perturbed, he simply continued to be Larry. And we continued to tease him.

The smiles fell from our faces when Betty called on September 5 to say that Larry had collapsed during their weekly hiking club outing at Panther Creek State Park. It was a massive heart attack, and efforts to revive him failed. It seems impossible that he is gone”full of life, always laughing, healthy and active. Along with Betty, he practiced Tai Chi daily and taught weekly classes. Along with Betty, he hiked the trails of the Great Smoky Mountains National Park, House Mountain and other local venues. “Along with Betty” seems required when talking about Larry”well, okay, when it was time to pour concrete at the Smoky Mountains Peace Pagoda, she let him off this leash and he came and put in a full day’s work. How could this be that he is gone from us?

But it is, because life can not be predicted, and its turns sometimes feel like hammer blows, and we are left with a vast emptiness that we will slowly fill with memories. Larry pulling kudzu at the Peace House”which he did on Wednesday. As he and Betty hiked the next day, he commented his arms were sore from tugging at the ravenous weed. That was the only warning his body gave him, and it was not enough. They turned back early, and nearly reached the parking lot.

Larry was a major force in OREPA; he and Betty were active in the Gathering Community that met every third Sunday for years to contemplate nonviolent living in a culture of violence. When he was awarded the newly established Chair at the University of Toledo in his field, Special Education, they bought a speakerphone and put it in the Peace House and joined us every month long distance. While in Toledo, the US invaded Iraq; Betty and Larry were core members of the peace community in Ohio, helping build thousands of crosses for public reminders of the cost of war.

When OREPA launched Sunday vigils in November 1999, Larry and Betty were there. And they were there week after week after week, never missing, as we played games, sang, reflected on readings, discussed important issues. They came back when they could during their Toledo sojourn and, when Larry finally retired two years ago, they picked up as though they had never been gone.

Which, in a real sense, they never had. They were at every action; when we needed to, we simply incorporated them in our plans and told them when they got here what they would be doing.

I first heard of Larry before I met him. Betty came on to the Decision Making Council of OREPA in the early 90’s and we were just getting the hang of email. She didn’t have an account, but she told us we could use Larry’s University account in a pinch. “Just don’t send him too much stuff,” she said. My picture was of a busy university professor whose support for his wife’s activism only went so far; he was content to be on the periphery as long as things didn’t get out of hand. Of course, like most blind judgments, it was completely wrong. Larry was busy, but when he came to OREPA, he came in with both feet, planted firm, and never left.

In 2003, when Bishop Tom Gumbleton and the Pax Christi leadership were coming to Oak Ridge, an early morning scenario was planned”the road leading into the nuclear weapons plant would be blocked during rush hour. The only problem was stopping traffic in the pre-dawn darkness long enough to get the blockades and people safely onto the street. It was decided traffic would need to be stopped for at least thirty seconds; metallic signs warning drivers of a security exercise in progress were purchased on line, and two volunteers agreed to serve as flagmen with octagonal, red stop signs to interrupt the flow from both directions. The day before, one of the flagmen was suddenly unavailable. A call was made to Toledo. “Larry,” the caller said, “bring a black shirt and hat with you, we’ll need you at 6:00a.m. on Monday. Can’t tell you what for. You might be in jail when it’s over.” Larry laughed as he answered with a simple, “Okay!” The action came off without a hitch; Larry was not arrested; traffic waited more than fifteen minutes at his stop sign and the road was closed for nearly an hour.

There was a Sunday afternoon years ago when Larry was responsible for the Sunday vigil. He had recruited his brother, Greg, an accomplished labyrinth builder, to lay out a temporary labyrinth at our vigil site at Y12. Greg labored all afternoon, and when we arrived at 5:00 there was a beautiful, expansive labyrinth mapped out with ropes. We were given minimal instructions and told to begin”forty minutes later we reassembled in our circle to debrief. Larry said, “I have to say, at the beginning of this I thought it would be an interesting thing to do, but I didn’t know what other people would think. I figured we would do the walking and appreciate the labyrinth. I was totally unprepared to be so moved as we walked.” Heads nodded around the circle. Another person spoke, “I felt the same way. I didn’t know what to expect, but I didn’t expect much. I mean, what’s a labyrinth? But it was a powerful experience, the silence, the passing each other, following the path.” Larry’s honesty called others to be honest.

Fifteen years ago, when the Gathering Community first met, we felt our way forward gingerly. A few meetings in we began sharing our stories as a way of getting to know each other more deeply. Each person had twenty minutes to tell their story”every one fascinating and way too abbreviated. Larry and Betty told of being at Kent State, graduate students, in May of 1973, when the National Guard opened fire and killed four students. Larry talked of growing up in New York City surrounded by radical family members during the days of the red scare. Hushed conversations in the dining room, strangers coming to the apartment for a day or a week, “uncles” or other distant relatives. As we sat listening, Larry’s voice grew quiet and husky. “I never imagined I would be lucky enough to find that kind of community in my life,” he said. “I didn’t think they existed any more.”

Larry Coleman once offered a definition I have passed on in many presentations, sermons, and parental chats with my own kids. “Integrity,” Larry said, with his hand out and his fingers and thumb stretched wide apart, “is trying to close the distance between who I say I am and what I do.” His finger and thumb drew closer together as he spoke. The gap was small, if there was a gap at all, for Larry Coleman. When he saw clearly the right thing to do, he did it; most of the time, I am sure, it didn’t even feel like a choice.

On Father’s Day, 1999, Larry joined seven other Dads crossing the line after we were commissioned by our children”we wore their pictures around our necks. Taryn Strauss stood in for Larry’s daughter that day as we crossed the blue line arm in arm, trespassing at Y12, on our way to court. It was Larry’s first arrest, but not his last. That one happened in May of this year”it was bogus, prompted by a letter Larry wrote to the Oak Ridger newspaper about police conduct during our April action, and we were preparing to challenge the charges in court in November.

There are dozens more Larry stories, and we’ll be telling them over and over in the days and weeks to come. Larry was in his second year of service on OREPA’s Board of Directors and brought energy and ideas to the Fundraising committee. He gave himself generously to OREPA and also to the Taoist Tai Chi Society of East Tennessee. Over the last couple of years, Larry and Betty had been making good use of their retirement, taking an extended camper trip across the country with his brother Greg and Edwina; they traveled to Alaska and circled around visiting the kids”Ali in Ohio, Erin in Florida, and Angie in Knoxville”and other family. No matter how far his travels took him, and no matter how exotic the outings, you could be sure that Larry had a handful of kibble with him, in his coat pocket”he was always just a reach away from making his dogs happy. Other people make plans for how they will do the things they always wanted to when retirement comes, Betty and Larry were doing them, being with the people they loved, traveling with them and on their own, and there is at least that tiny bit of what may, eventually, seem like consolation. Right now it just all seems like a terrible loss.

We will gather to tell our Larry stories and to share our profound loss at a time to be determined. In the meantime, we hold Betty and all the family in the light.

The OREPA Board has now decided that we are prepared to do a limited re-opening of the Sunday vigil to allow for slightly more participation.  We are asking anyone who wants to attend a Sunday vigil to sign up in advance—by the Thursday before. There are two ways to sign up. You can email Ralph at orep@earthlink.net or you can call him at 865 776 5050. If the five slots are already taken, we’ll ask you to wait until next week. All vigilers are expected to wear masks. Bring your own chair. Avoid physical contact and maintain an appropriate social distance in the circle of chairs. Of course, if for any reason you feel you may have been exposed to the virus or to someone with the virus, you should not attend the vigil. At this point, we are not resuming our monthly potlucks.