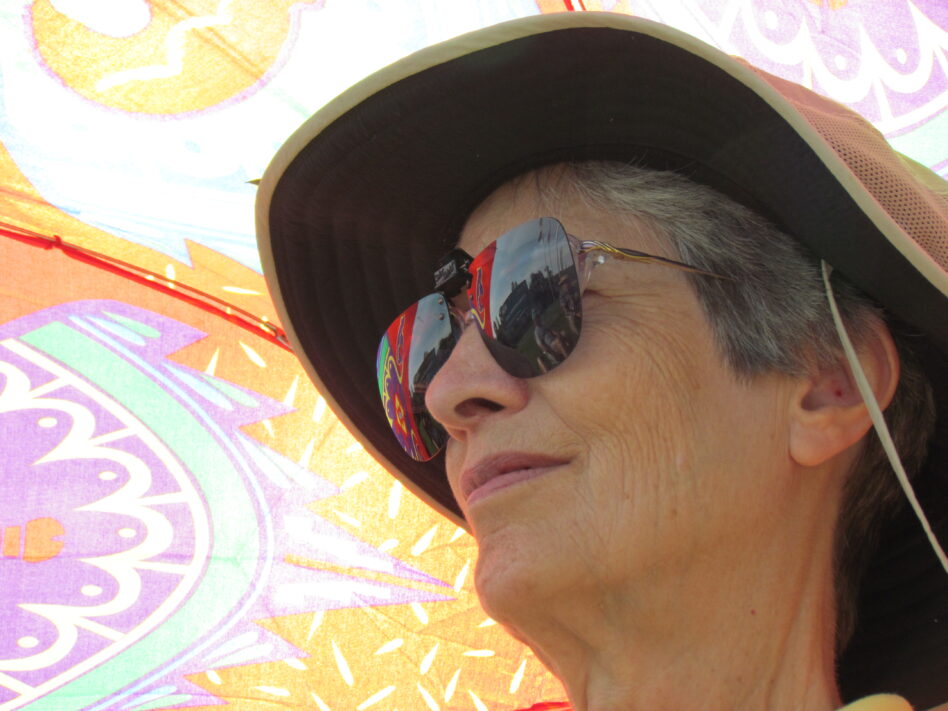 On Saturday, August 13, 2022, we gathered at the Great Smoky Mountains Peace Pagoda for an Obon Ceremony, a time to honor ancestors, share memories, and rekindle their spirits among us in the Japanese tradition.

This impulse is not foreign to the Christian tradition. At many funerals and memorial services, a verse from the New Testament letter to the Hebrews is invoked: “Since we are surrounded by so great a cloud of witnesses…” it begins, envisioning a gathering of those who have gone before and yet remain with us, present in spirit.

Later that same day, August 13, Sister Mary Dennis Lentsch, PBVM, an amazing woman of faith whose life was compelled by that Christian tradition, joined the great cloud of witnesses. Her sister and niece were with her in Dubuque; her death came at the end of a slow decline that began with a diagnosis of pancreatic cancer a little more than two years ago.

Mary Dennis left her family farm in Iowa as a young woman to join the Sisters of the Presentation of the Blessed Virgin Mary. In her early years, she taught school. But several decades ago she left Iowa and came to Tennessee to serve in Appalachia. Assigned to assist a rural mountain community, she gathered women together to see what might be done. The women said they needed childcare services, but there was no place and no money. Mary Dennis had no idea where to start, and she told them so. Then she said, “So, we’ll do it together!” Of necessity, her endeavor ended up not only providing the needed services, but instilling in the women who had to figure out what to do and make it happen, confidence and a new sense of self-reliance.

I first met Mary Dennis on a trip to Nashville with the grassroots organizing group Save our Cumberland Mountains (SOCM) – now Statewide Organizing for Community eMpowerment. She was with Anne Hablas, a Presentation sister from North Dakota. The two of them were quiet, reserved, and even seemed a bit timid as they anticipated their first trip to the state Capitol. Timid, I was soon to learn, was not a word to associate with Mary Dennis. She might be wary of a situation until she had made an assessment, but once she understood the lay of the land, she asked herself what her faith required, and from that moment on she was an unstoppable force.

When the Oak Ridge Environmental Peace Alliance announced the Stop the Bombs campaign in 1998, Mary Dennis was one of the first to step up. On August 6 of that year, she was arrested and charged with trespassing at the Y-12 Nuclear Weapons Complex in Oak Ridge, Tennessee, protesting the ongoing production of nuclear weapons there. It was not her last arrest. Over the next fifteen years, she would be arrested countless times on a variety of charges. When the government announced, in 2001, that trespassers would face federal charges, including prison, Mary Dennis was undaunted; she climbed over the racks assembled across the road and became a guest of the United States at the federal prison in Lexington, Kentucky.

The magistrate in that case had sentenced Mary Dennis to two months in a halfway house, but before her scheduled report date, the Justice Department under John Ashcroft declared judges no longer could determine where sentences would be served. Several years later, as we stood outside the federal courthouse holding cardboard placards with empty boots stenciled on them, protesting the war in Iraq, the magistrate judge, returning from lunch, walked past us on the sidewalk. He paused in front of Mary Dennis, spoke briefly, and went on. Later she said, “He just said, ‘You know it was never my intent to send you to prison.’” She assured him she knew that.

The faith that sent her across boundaries in Oak Ridge also carried her across lines in Columbus, Georgia, at Ft. Benning, the military base notorious for training soldiers from Latin America who routinely return to commit war crimes and to prop up or lead corrupt governments. Mary Dennis spent six months in Lexington after her arrest at the School of the Americas.

Mary Dennis was a tireless worker against nuclear weapons; she volunteered at OREPA, lived in our Peace House in Oak Ridge for several years, maintained our database, served on the Action and Events committee, folded tens of thousands of peace cranes and attached red yarn to them—each year on August 6, hundreds of those cranes would be hung on the fence in front of the bomb plant in Oak Ridge, each one a plea for peace.

Mary Dennis left East Tennessee after hurricane Katrina ravaged New Orleans; she spent several years in ministry there with a small group of nuns, serving food and providing other services. When she came back, she picked up where she left off with OREPA, and she took up residence at Narrow Ridge Earth Literacy Center, living a sparse life there in a tiny one room cabin that she shared with a four foot long snake, taking on numerous tasks for Narrow Ridge, and, every two months, assembling several hundred copies of OREPA’s bi-monthly Reflections for Nonviolent Community, booklets filled with daily quotations, many of which Mary Dennis culled from her readings to share with the wider community.

In her last years in East Tennessee, she became a resident at the Riverside Catholic Worker house in Knoxville, assisting in the raising of foster children, later adopted, making and serving hundreds of sandwiches weekly in a neighborhood ministry, and serving on the Board of Directors and working for OREPA as a volunteer.

In early 2020, Mary Dennis went to visit her biological sisters, Rowena and Maureen, as part of a month-long trip that was to include a retreat at the Presentation Motherhouse in Dubuque. She ended up sequestered with her sister Maureen as covid-19 descended on the country. After several months, she was able to travel to the Motherhouse in Dubuque, quarantine there, and rejoin her community there. She continued to collect readings for the Reflection Booklet and sent them to us.

In the end, it seemed providential that Mary Dennis was home, with the Presentation Sisters, as her health declined. We missed her terribly in Tennessee, but we were pleased that she was being cared for so carefully by her community.