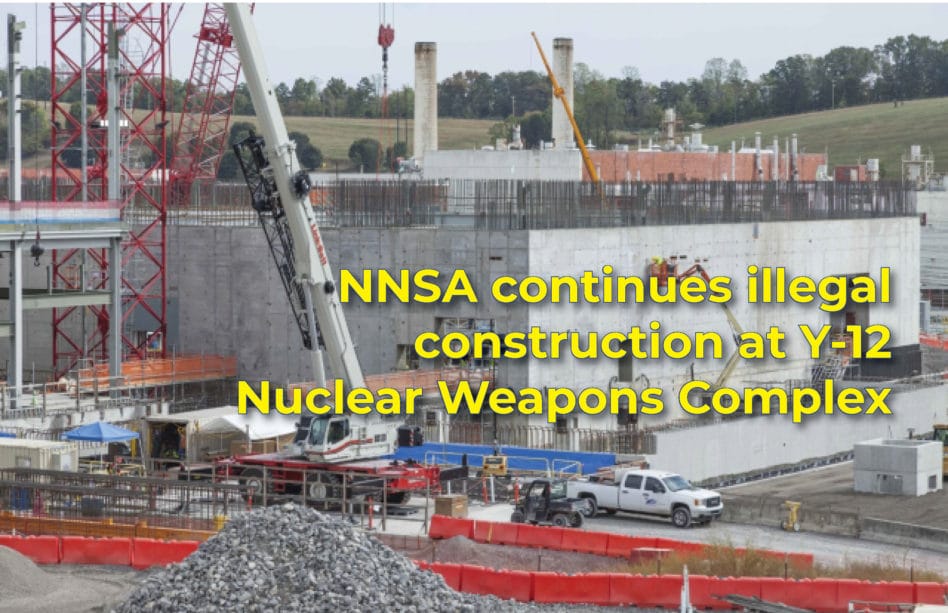 Just over eight months ago, federal judge Pamela Reeve stripped the National Nuclear Security Administration of its legal authority to build the Uranium Processing Facility bomb plant in Oak Ridge, Tennessee. The UPF is an integral part of NNSA’s enriched uranium plant was originally the whole plan. But in 2014, NNSA walked back its earlier plan and declared it would down-size the UPF to be a weapons production facility only.

The new plan, rather than replacing all of the aging, unsafe facilities, will continue enriched uranium operations in two unsafe buildings at the 9215 Complex and the 9204-2E facility. Those facilities, which NNSA admits do not meet current safety standards for Category IV nuclear facilities, will be used for dangerous weapons activities for 30 more years.

It was the new plan, dramatically different from the old plan, and new information about the risks of earthquakes, that led judge Reeve to vacate the National Environmental Policy Act documents that authorized construction of the UPF. She vacated a 2016 study and the Record of Decision that followed; she also vacated a 2018 environmental study. You have to do a new study, she said, and it has to consider the impacts of an earthquake at Y-12 using the most recent data.

NNSA responded by declaring it would defy the judge and continue construction of the UPF “on an interim basis” while it prepared the environmental analysis the judge ordered.

Here’s the catch, though the law, NEPA, does not allow a government to take actions that might prejudice the outcome of its environmental studies or limit its options when it comes time to make a decision. And that, of course, is precisely what UPF construction is doing.

NNSA’s defiance of the judge strips the National Environmental Policy Act of its power. That’s okay with NEPA. They’re happy to test the court, confident it will not stand up and demand that construction stop until NEPA’s requirements are satisfied, as the law expects.

There are precedents federal judges have required construction halts in the past while NEPA analyses were prepared.

Shortly after NNSA made its declaration it issued an Amended Record of Decision that for all intents and purposes restated the ROD the judge had just vacated it provided not one tiny shred of analysis of earthquake risks as the judge had ordered.

OREPA went back to court. We filed a motion asking for an Enforcement Order basically asking Judge Reeve to animate her ruling, to bring it alive on the ground in Oak Ridge.

In our motion, we noted: Spending hundreds of millions of dollars on construction activities for facilities that will remain in place for many decades limits alternatives. NNSA has since prepared a quick and utterly inadequate Supplement Analysis in an apparent effort to mollify the court. Unfortunately, the upshot of the Supplement Analysis is that it reveals the need for a new Site-Wide Environmental Impact Statement at Y-12. This is exactly the outcome NNSA wants to avoid at all costs. Even at the price of breaking the law.